The Prime Minister of the Ukraine said this week that it appears that Russia had forgotten about the Second World War and now is pursuing a Third World War.
Or is it a case where the Russian leader has taken the measure of the resolve of the world, specifically American President Obama and believes that the world will "blink" and back down much as Russia did during that oh so long ago (at least by the standards of this instant news world we now inhabit) Cuban missile crisis?
It seems that the stream of American political pundits crying out loud for the last term and a bit about how weak the sitting President is on the world stage may, just may, have a point.
Then again, to carp and whine is easy - but to wear the cap of authority and act accordingly, one wonders how well those folks would acquit themselves.
It is so easy to sit back and snipe isn't it?
But when you are in the crosshairs - well, that is a different story right?
No matter what, the situation in the Ukraine will probably define how history looks back on both Mr. Obama and Mr. Putin.
Hopefully, there will be a history for the world to look back on.
And yes, that is how grim I think it is.
And to show that in today's brave new world, money trumps humanity, reports from Germany state that in 2012 Germany sold €40 million worth of rifles, pistols and armoured vehicles to Russia.
What is that old phrase "money talks and....?"
Yup.
In Argentina, the uneasy tidings of economic peril continue to emerge from reports from the government itself.
Simply put, the trade balance in the first quarter dropped 92%.
Industrial production in March dropped 6%.
And the Argentine Catholic University (UCA) released its estimates for poverty in the last quarter of 2013, with an upper estimate of 27.5% - far from the last government stated poverty rate of less than 5%.
Sadly 2014 is shaping up as a potentially horrible year for the people of that fabled land
In Italy, that sad spectacle of a former respected politician, Silvio Berlusconi once again showed incredible stupidity by saying at a party meeting that in his opinion "according to Germans, there never were concentration camps."
Unbelievable.
And to show how corrupt the Italian legal system seems to be, he is a convicted felon and has yet to serve a day in prison.
Unbelievable.
Canada has Rob Ford as a laughingstock and Italy once again shows the New World that the Old World is better at providing incompetents.
In Afghanistan, the presidential elections failed to produce a clear cut winner this week. Therefore a runoff will be done and to many, that is a positive sign of democratic progress in a country once totally ravaged by insane wars and tribal feuds over centuries. Just ask the British and Russians how they view the Afghan people after their failed attempts to colonize the country.
Yes, a dim ray of hope but still, it is a hope.
Speaking of America, have you noticed how the airwaves and print outlets are very quiet on the topics of Healthcare and budget problems?
Not sexy enough right now one supposes.
That being said, the full cost of the changes to the health system, dubbed Obamacare by critics, is just starting to impact the economy of the country and for sure the impact on the "average" citizen is yet to be felt - for better or worse.
And for the budget/money woes?
This Winter/Spring it was assuaged by a series of temporary measures but those just pushed the ticking fiscal "bomb" a bit down the calendar road so to speak. In a sublime act of crass political arrogance shown by all stripes of politcos on Capital Hill, this "stuff" will not hit the fan until after the next round of elections.
How convenient right?
How dare the electorate even think that these self serving trough feeders would do anything that might make them accountable before rather than after an election!
Sadly, it seems that the average American is just that docile.
But talk about guns and whoa Nelly indeed, that gets them stirred up it seems.
Hard to fathom at times.
Canada has no reason for smugness here as the recent news from the Supreme Court (legal body ) of Canada ruled that the elected Government cannot close down the so called Chamber of sober second thought  AKA The Senate without meeting a series of conditions that are impossible to do. So...an un-elected group of grossly overpaid non accountable political appointees cannot be touched by anyone at all.
Nope, never gonna happen.
And of course the Canadian public will meekly accept this.
The Yanks could learn some cool things about greed and corruption from the Canucks one thinks,
Over to the Sandwich islands for some sanity.
Did you know that this year is the 51st for the Merrie Monarch festival?
It is a celebration to pay homage to alii, including King Kalakaua, Queen Lili'uokalani and Prince Lot as well as Princess Likelike. Also 13 solo dancers vied for the title of Miss Aloha Hula, which went to Ke'alohilani Tara Eliga Serrao of Ka La 'Onohi Mai O Ha'eha'e.
Well done indeed! 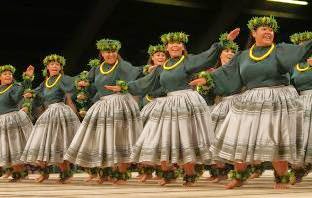 Here on my Island, well...Spring continues to show its varied colours to one and all. Indeed I went for a walk near the local harbour and snapped the following sights... 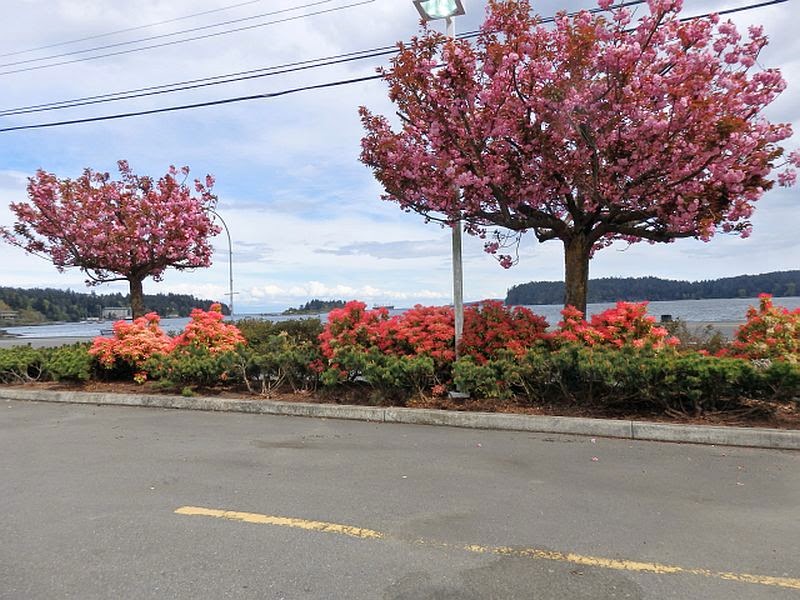 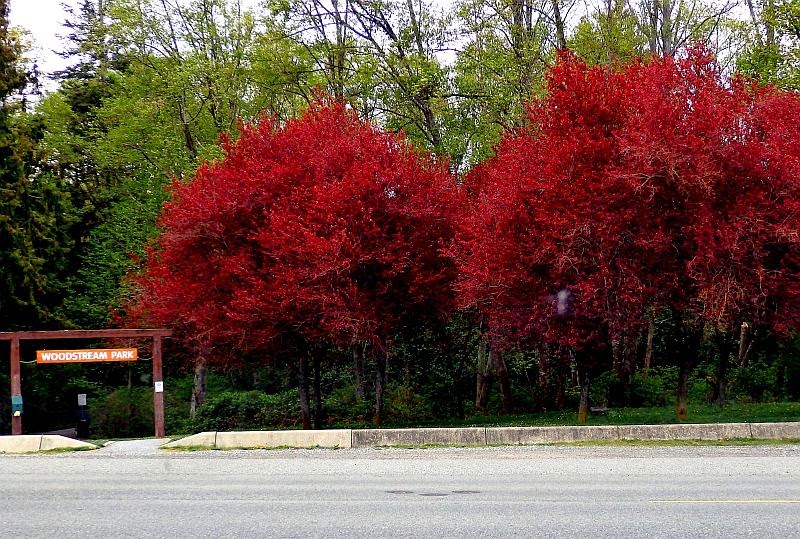 take care out there,
flatlander52

take care out there,
flatlander52

So last posting I mentioned about the upcoming election in the province of Quebec.
That is history now.
The secessionist governing party was soundly defeated by a Liberal Party led by a person who publicly says that Canada is an OK country to be part of.
Who would have believed it?
Perhaps, the answer to this might be a very simple one.
Maybe, just maybe the vigorous wanters of an independent Quebec are in the throes of middle age and the dreams of a new country dim compared to worry about pensions, health, grandchildren and their own mortality?
Maybe.
Priorities and desires change with age.
It is called maturity.
This week in Canada saw the sudden passing of Jim Flaherty. He was the former Federal Minister of Finance under whose direction Canada was able to navigate through the worst of the last recession/depression with minimal damage. Indeed Canada emerged as one of the better economies during that period. He had resigned his office a little over three weeks earlier in order to devote more time to his family. Reports indicate that there will be a state funeral for him this upcoming week and deservedly so.
A good man gone too soon.
The unrest in the Ukraine continues to simmer with violence sparking here and there and barely concealed fear of war gripping any rational citizen. The call remains in Mr. Putin's' hands.
The suspicion that there is a more detailed long term goal becomes stronger by the day.
Is this the start of a new Russian Empire?
Or at least the attempt to start one by Mr. Putin?
One suspects the answer will be shown sooner than later.
In a report totally ignored by the media in the United States, Finance chiefs from around the globe today gave the U.S. until year-end to ratify long-delayed reforms to the International Monetary Fund. The reforms would double the Fund's resources and hand more IMF voting power to countries like the so-called BRICS - Brazil, Russia, India, China and South Africa. And this is something that the American government really does not want to happen. And the folks in the Tea Party who many term as international isolationists are extremely opposed to any perceived diminution of American power and prestige.
This story bears following my friends.
Do you remember the wall to wall coverage on the fiscal mess in Greece a couple of years ago? All the talking heads smirked over the stress and grief that country was going through in almost a gloating manner?
Hmmm... this week Greece returned to the bond market and yield-hungry investors rushed to buy its debt in a 3-billion euro deal that could mark the beginning of the end of its bailout era.
And hardly a murmur from the media.
Kinda sucks to have a good news story these days - all the media can do is obsessively focus on grief, fiscal ruin and some celebutante butt.
Did you notice in a number of the photos taken from airplanes in the search for that missing Malaysian airliner, all the floating debris - mainly plastic?
Terrible.
That being said, why cannot a country or some enterprise set up a fleet of scavenger ships to scoop up the debris and convert it into either a manufacturing product or a heat source by its combustion? Surely with all the smart green activists there are some with the expertise to build non polluting power plants that feast on plastic debris?
Aren't there?
So in the capital city here on my Island, the sad story of political ineptitude in regards to the building of a new traffic bridge continues. A contract was awarded to a firm to build a vehicle traffic bridge across a water way with the bridge to be raised when shipping needed to pass under it. So, the construction started last year under what officials called fixed price and fixed delivery specifications. And of course now the builder has filed documents seeking more money and a later completion date. A top elected official blustered about "fixed price, fixed delivery date" to the media. Sounds good right? Hmmm...not so fast as it seems that the tender specifications were only 65% complete.
Really.
And the city expects the final price to be accurate based on that?
Something like having a lawn installer giving you a price for 65% installation of grass and then saying that the bill stays the same but you also want the additional 35% for free?
Really.
Politicians wonder why the public is sooooo cynical about them.
Really.
Meanwhile Spring continues unabashed here as the local magnolia and cheery trees are exploding into flower and giving one and all a grand sight to see. 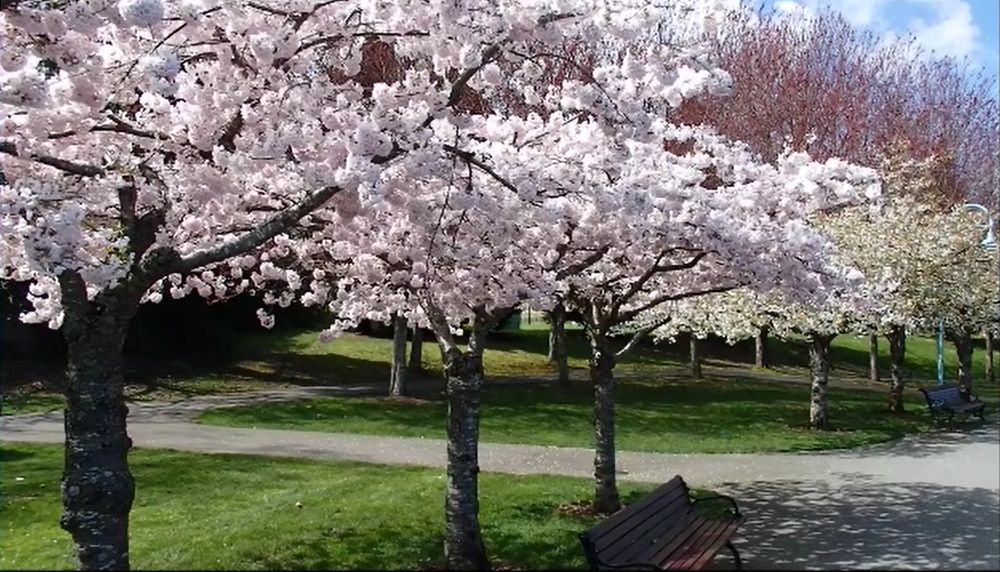 And my walking program continues unchallenged much to my sorrow.......
take care out there,
flatlander52
Posted by flatlander52 at 12:00 AM No comments: And the rotter saw me and tried to stare me down!
Unbelievable to say the least.
Kind of cool actually.
Take care out there,
flatlander52