Well this posting is by necessity a bit disjointed due to the fact that we are in transit from our Island to the Sandwich islands via aeroplane.
So accept my apologies for any "jumping" around or indeed the shortness of the blog this week.
All forms of media are now completely saturated with either fond/bitter/nice/mean/nasty/hopeful remembrances of the year quickly ending and while I am not in the same league as those blatantly overpaid self centered news experts/pundits (heck, my blog is free!) I will put forth some thoughts.
Death is a part of life for humanity and we lost a number of folks this year. I will only mention two. One made an impact on mankind that hopefully with endure and grow through time - Nelson Mandela. Another was a man that was everything to his family and the people he touched in his life. Not a world famous personage, no, not he, but in his own way, just as important as Mr. Mandela, and that was my uncle Karl K.
Both heroes left us better for knowing them.
What next for the world?
America stares at the consequences of the drastic changes to its health care system both in terms of the impact on citizens and the very real, apparently incorrectly figured out fiscal impact. It seems a rule of governing that all programs are over hyped and inversely low balled as to cost. Sadly politicians all over the world assume the voter is stupid and cannot figure out the truth as to cost vs promise. What happens now to the USA economy? Anybody who says they know, well, I think they are just guessing and hoping. Will further budget cuts (and they are coming) hurt the economy? What about the military? For every spokesman that says a cut will destroy the functioning capability to respond to outside threats, a reports emerges about abandoned,never used multi million dollar facilities in countries like Afghanistan alongside newly delivered airplanes and armoured vehicles being mothballed in the American desert lands and never having ever been used. America needs (as does the world it protects) a strong healthy military but it also has to have a cost effective one and that should be a focus for the coming years.
For the rest of the world?
Does any person see changes for the better in the Middle East? North Korea? Europe?
Anywhere?
Sadly, probably not my friends.
One can only hope for so much and instead strive to improve the life they live and the impact that they have on others and the part of the world they live in. That includes the environment. I was taught that each persons responsibility to the land was to leave a place they stayed at or used - better than they found it. And I have always tried to do so. Maybe a promise each can make to the world is to try and do the same. That being said, blind hatred of change and a myopic fairy tale view of a world that can not exist harms all good causes. Too many folks for example decry oil usage but cannot or are incapable of understanding the role oil based products play in their lives. They boycott big oil - while talking on their plastic based cellphones. They cry about forced labour but refuse to but local produced clothing because they do want to pay that much money. They scream about high taxes but want safe streets and cheap almost free electricity - because they are of the generation that seems to have a birth right to deserve everything for almost nothing. Their elders and great grandparents that struggled to live during the Depression of the 1930's would be dismayed.
You know what though?
Now that I am a self proclaimed grizzled old geezer, I still am an optimist.
I still enjoy a golden sunrise.
I still enjoy the look of joy on kids faces at playtime.
I still believe this world can and will get better.
Let's see if WE can make 2014 be a good year for you and for the world....... 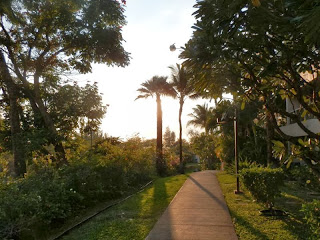 from the magical Sandwich Islands,
A hui hou
flatlander52

So, just a few more days until Christmas and time for a few thoughts and reflections instead of my usual rants and moans about this and that...
One of the things that is common to all majour celebrations regardless of culture or religion is the time available to reflect and consider friends, family and one's life in general and that is a precious commodity in this high speed 24/7 electronic invasive no mental “downtime” society. People have become too immersed in the “commune” life of interdependent consciousness provided by Facebook, Twitter and the like to be able to sit back think alone and quietly it seems.
So this time of reflection is a good thing.
Time for an update.
I have mentioned in earlier blog columns about the three young ladies that I consider my adoptive “daughters” because of the influence they have had on my life since I first met them.
Last week we were fortunate enough to have a thoroughly enjoyable lunch with our “daughter” the realtor here on the Island and later reflected on our good fortune to have had her enter our lives last year,
She is a really great person.
I had news this late fall where another one of my “daughters” is continuing on her life path and is starting to re-enter the work force, but on her own terms – she is an independent and strong willed young lady.
She is a really great person.
I have heard from my third “daughter”, the author that yet two more books are being published and continue to be in awe of her talent and super personality.
Here is a link to her web site - worth a visit- http://allthingsimpossible.com/
She really is a great person.
All three have so enhanced my life, that words fail to express my gratitude towards them.
I am fortunate to have them as my friends and “daughters”.
We had a small gathering the other day and sometimes you forget how nice it is to get together with people and just enjoy the moment, something sadly lacking in many of the Christmas Season's office and home parties as office politics play a huge corrosive role in those.
And that is too bad.
I was able to stand back and observe just how much pleasure people got by being just themselves, because all of the guests were past the age where they needed to impress anyone with their lives or status or “toys”. No, these folks were comfortable in their “skin” and at peace with themselves at this stage in their lives.
My thoughts go out to a friend and his mother in Germany whom I have not seen in many a year but still are close friends and at this, their first Christmas without the family patriarch. A sad and lonesome time and hopefully they will do well.
Here on the Island, where snow hardly if ever falls in my little town, it is somewhat different to drive around at night and see so many houses ablaze with festive lighting and not see any snow on the ground. But, with this being our second Christmas here, it is starting to have its own appeal. And indeed, one experiences a mellowing of spirit unknown when we lived on the Prairie flatlands covered in its many feet of snow and really darn cold temperatures. And yes, here on my Island we are fortunate in that regard.
But I will gladly accept small mercies these days.
So what thoughts/message can we take from this time of the year anyway?
Well, as long as man exists, sadly there will be war, strife and both good and evil. It is part of our makeup unfortunately. But maybe that is part of the meaning of Celebrations like Christmas ( and yes, I know that the occasion is the celebration of the birth of Christ) where if we take the time for reflection and thought, maybe, just maybe, we can become better as an individual and that may slowly change humanity for the better.
And that would be a good thing.
So, a merry Christmas to all – those that believe in the meaning of Christmas and all of the others that accept the message and meaning of the season of “Peace and Goodwill” to all mankind.
My next column will be posted from the Sandwich Islands, so until then,
“A hui huo” 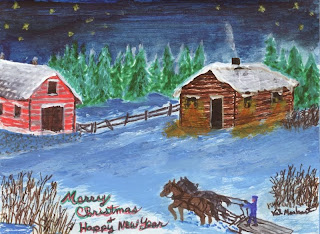 For those interested, the illustration is the work of an emerging Saskatchewan artist, V. Morhart
flatlander52
Posted by flatlander52 at 12:01 AM No comments:

Gone
Never ever
should he be forgotten,
please,
remember this man.
The pages and air waves have been full with tributes to this man and they barely touch the depth of him.
Nelson Mandela.
A hero to all of humanity.
A hero and beacon to all of us that try to make a good difference
in the state of mankind.
My hero.
Words are inadequate and indeed they fail me as I try to write about Mandela and his meaning to me and South Africa and the world.
Suffice it to say that he breathed different air than we mortals, that he saw things invisible to our eyes and he understand things we cannot grasp.
As a person grows and ages, you can judge the growth of their character and morality by the people they call “their heroes”. And I mean no disrespect to the individuals I will mention but I believe you see what I mean as I progress. As a young child, cowboys strode tall – the Autrys's, the Wayne's, heck even the Zorro's. Then later, The Beatles and later still, for some, the Bieber's and the Kanye's and the Kardashian's. Eventually we (usually that is) all grow up and outgrow these one dimensional people and with luck become attuned to the Mandela's and the Tutu's and the others of this ilk.
I will not be the only one to miss this man.
Rest well Nelson Mandela, you have earned your sleep – and thank you. 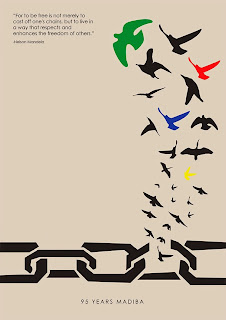 I will return next week for a full column but somehow the cares of the world just seem a little less important than they were a few days ago.

Take care out there,
flatlander 52
Posted by flatlander52 at 12:00 AM No comments: 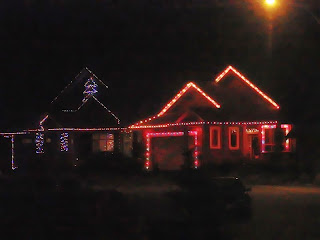 Actually, it is kind of nice!
take care out there,
flatlander52