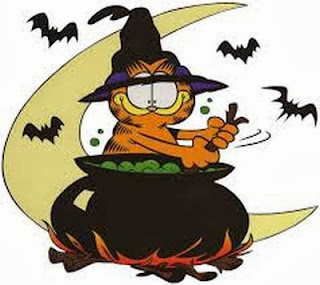 take care out there,
flatlander52
Posted by flatlander52 at 12:01 AM No comments:

Arrgghhhh….I guess this is the new normal in American politics and I never quite grasped it. The days of a budget being drafted, voted on and implemented for a set period of time - the fiscal year in fact., are long gone and never to return apparently.
Seemed to work fairly well in days gone by didn’t it? Well, the new reality is a lot different isn’t it? The government no longer passes a budget, no, what happens is brinkmanship, posturing, blustering and then tip toeing to the edge of the financial abyss and then passing a “band aid” form of money allotment (filled to the brim with “pork” allocations - special money pet projects for certain politicians in order to secure their support) that as now, lasts for three months and then the process can start again and all the while the financial world breathes a huge sigh of relief and the world returns to what is called “normal”.
Huh.
Isn’t it great that all the drama will repeat in January?
What fun.
And those pompous, posturing politicos are actually proud of the “work” they do on behalf of the American people.
If they worked for me - the whole boogle of buggers would be fired in a heartbeat - let them live on food stamps for a while OK?
And all the while, amid all the gloom and doom reports on the “poor, shattered” American economy that some media gleefully describe, there emerges the odd, quickly stifled report on how the economy actually IS recovering and actually shows signs of perking along nicely these days.
Interesting.
But there is more money made in reporting misery isn’t there?
Heck, what would happen to all the pundits if they were shown to be behind the actual curve?
Oh my, maybe they would have to get a job in the real world wouldn’t they?
Oh well.
JPMorgan, the huge American bank has agreed to pay 14 billion in penalties for its role in the 2008 mortgage crisis in America even though the investigation and possible charges arising will continue. Many people never thought the day would come when those actually responsible for that economic disaster might actually be held accountable in the law courts.
For all those that hate everything America stands for - those in, say, the Middle East, many parts of Europe - can you honestly believe that your country would do the same?
I doubt it.
Thousands of Portuguese took the streets of Portugal's two most populated cities to demonstrate against planned cuts of pensions and salaries.
Saturday's demonstrations were a response to the government's decision to extend austerity measures in the 2014 budget.The budget includes wage cuts for public sector workers ranging from 2.5 percent to 12 percent on monthly salaries of over 600 euros. Pension cuts should bring savings of 728 million euros.
You think tough times in Europe are over?
Think again my friends.
In Italy, maybe common sense and someone with integrity has prevailed in the sad, pathetic saga of the former Prime Minister, Berlusconi who was actually barred from politics for 2 years. He has demonstrated contempt for due process in the believe that he was above laws meant for the common man,not “special people” like him. Every country has them don’t they?
In Canada, we have a couple of Government Senators who believe rules of fiscal honesty are waived in application to them. In America, take your pick of in public drug smoking rappers, in Africa - hello Mr. Mugabe, you get the idea?
In 2012, in the city of Buenos Aires, we were spending a month there and walked by the Once underground train station the day a train crashed killing scores of people and injuring many others. The carnage and sorrow was horrible. A investigation followed, charges were laid and remedial actions were promised and apparently taken.
And yet……. this Saturday another train crashed at the same station, injuring at least 99 people.
What the hell is going on?
How can such a great, proud, progressive country permit this to happen again?
Sadly, probably the result will be yet another inquiry with the same net zero impact.
Comedian Felix Dexter left us this week.
Look him up, a true comic genius.
This week the United Nations elected Saudi Arabia to a prestigious seat on the Security Council, in what many self professed important pundits would consider a tremendous honour.
Guess what happened then?
The Saudi leadership refused to accept the position and lashed out at the world body for "double standards" and failure to protect peace.
Yay!!!!
The same United Nations that can so bravely send an official to visit Canada, tour some First Nation reserves and declare that Canada “has a long way to go to narrow the gap between aboriginals and non aboriginals”. And that is so true my friends. And so much work must be done to make this nation one of opportunities for all peoples.
That being said - where are the envoys reports on let’s say, Iran, North Korea, Zimbabwe - get the picture?
The United Nations has become a bloated waste of money more concerned with self perpetuation than what it was founded for and shame on it.
The Fall season is upon us and the colour of the foliage is a treat to behold. We have a relative off in New Zealand that has sent us a few snaps of the start of Spring there - good thing we are off to the Sandwich Islands later this year in our winter interlude otherwise we would be truly envious!
Also…. this week we went to the Capital City to see a evening performance from the legendary comedian/writer John Cleese and had a great time doing so. The city is gorgeous and so walk friendly and the weather was clear, calm and sunny all the while.
We had a small bit of fog the morning we left for the return drive home and the sight of that along the shoreline off Ogden Point was splendid. 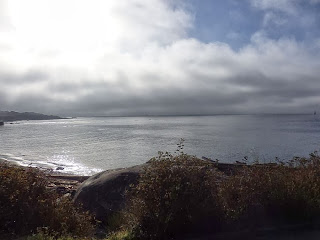 take care out there,
flatlander52
Posted by flatlander52 at 12:04 AM No comments: 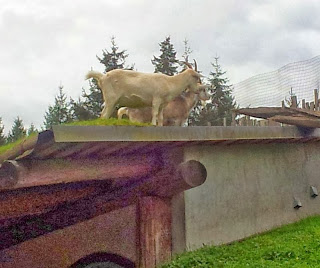 In a side note, I was astounded to be a witness to the following event at our abode. I had heard some squawking outside and after glancing out the front window, saw an EAGLE perched in the trees across the street! Now this may not be a big thing for many people but for a flatlander more accustomed to seeing crows, this was spectacular. Sadly in my rush to get a good photo, the following was the best that my shaky hands could do-sorry! 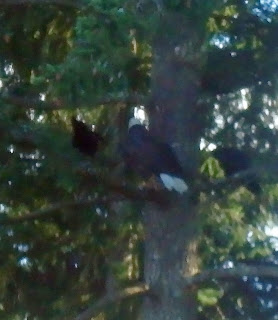 Anyway, have a great (Canadian that is) Thanksgiving!
take care out there,
flatlander52
Posted by flatlander52 at 12:00 AM No comments: 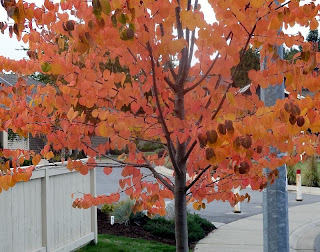 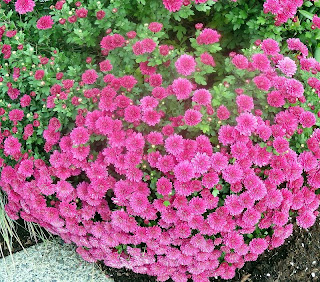 Already we have had reports of an early season blizzard hitting a couple of western states in America – brrr indeed!
Hopefully, not here on my Island!
So ends another weeks posting,
take care out there,
flatlander52
Posted by flatlander52 at 12:00 AM No comments: