OK, I am posting this weeks column on Saturday evening for the reason that we are so far East on the globe that if I wait until Sunday morning, it will almost be Monday morning where many read it.
So, without further ado.....
So the French have launched military action in Mali, and unlike when America does so, the world community says sweet tweet about it. That is so typical of most of the world is it not? So blasted envious and angry at American society that it will immediately criticize but never would it criticize the French for something that the Yanks would do.
Remember when the Brits mounted military action against the Argentinians over the Falkland Islands a few years ago?
Yup, same lack of response.
Figures.
So Mr. Chavez is undergoing further treatments in Cuba and no return date in sight for him to Venezuela. As said before, this does not sound right, but time will tell in his case, won't it?
Also in Venezuela there are reports of over 55 deaths in a riot at a prison. Have you ever read reports of the conditions in prisons in South America?
Chilling is too gentle a word.
The First Nations chief in Canada who had embarked on a somewhat controversial “diet/fast” stopped it this past week without getting the Federal Government to cave in to her demands.
One wonders if her actions have helped or hurt the cause for First Nations people in Canada.
It seems that as a result of the failure of American politicians to pass a budget, cuts to the military are going to come on stream. One action plan being reported on is to have ALL the civilian employees within the military take what is referred to in Hawaii as Aloha Fridays. That is a Friday as a day off with no pay. Great, financially hurt tax paying honest citizens for the cowardice of politicians.
How can these people even look themselves in the mirror based on their fanatical resolve to halt the running of the government and their hate of their elected President? Do they not realize that the people voted him in for a second term and maybe they should try to do their job and work with him as best as they can? Instead they are driving the country towards another recession – and it is their fault and no one else - that is for sure.
So North Korea is once again threatening to wage a relentless war against the Americans. Enough already. Let them do like so many other countries have in the past. Declare war, burn a few American flags, then say they surrender and then go in front of the world media to demand immediate American aid, money, food and reconstruction efforts as a “reward” for losing the war. And of course orchestrate left wing outrage against those “damn Yankees”.
Sigh.
So I read where a high ranking Al Qada terrorist has died from wounds in Yemen. Seems he was once housed in detention in Guantanamo Bay by the USA. Then so called libertarians, media and other apologists for terrorists everywhere were successful in pressuring the Americans to release him with the promise that he would not engage in terrorist activities again. Of course he broke that promise immediately and resumed his bloody ways. I have to ask you – how come there is total silence from those apologists now? Where is their moral high ground now? How come they never condemn these terrorists that revert to form after release?
Too easy to smugly criticize the Yanks isn't it?
Safer too.
Maybe these folks should move to those supposed havens and leave the rest of us alone?
Ha!
Sometimes the passing of a person, who, while not a world famous person, still brings sadness. Such a person was a man that went by the nickname of “Metro” in the province of Saskatchewan. Les Pavilik was his name and I knew him. He became an accidental entertainer many years ago and released a comedy album of Christmas music that to his amazement became a “gold” album (by virtue of numbers sold) and a new career was born. His work raising a large amount of money for charities over the years is well documented. I am pleased to say I knew him and considered him a friend.
In Britain the Prime Minister has promised “something” on continued membership in the European Union. After reading his statements, he may put this to a vote but may or may not abide by the results. He may or may not ask for new terms for the country to remain in the union.
Actually, he sounds like he has completely mastered the art of being a professional politico and talking out of both sides of his mouth at one time.
Cool.
Did you recall that it is 2 years now since the protests started in Egypt that led to the downfall of Hosni Mubarak? And what has happened since then? Well it appears that the country has replaced a semi dictatorial leader with a Islamic Brotherhood semi dictatorial leader.
Some things never seem to change do they?
So, we are here on the Sandwich Islands enjoying the sun,the surf and the sand. 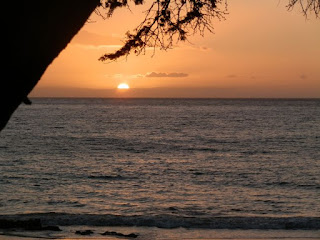 Of course it is high season for tourists and based on the numbers and money that they spend, one might believe that the worst of the American recession is well past.
Sadly with the increase in tourists is the sight of waaay too many middle aged and older men walking along the beaches and sidewalks clad only in swim trunks and showing highly oiled bellies flopping side to side as they slowly stumble along.
Terrifying sight to say the least.
And yes, they should know better and obviously they do not and that is unfortunate.
Maybe men should consider wearing full coverage?
We were walking along a beach the other day and saw a whale lazing along on the surface near the shore. Of course even though state law forbids approaching closer than 100 yards, obviously the man on the paddle board believes that rules and laws apply to other people - certainly not him! 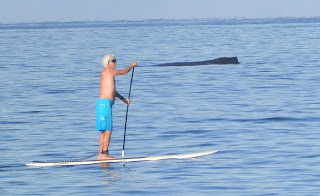 Still, it was an amazing sight.
So, that is a short column for this week,

take care out there.
Flatlander 52
Posted by flatlander52 at 10:34 PM No comments: 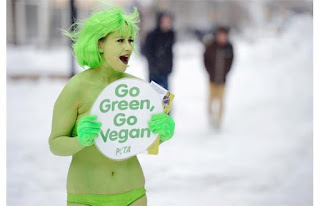 Meanwhile here on the Island we had a brief dump of snow the other day but happily it is almost all melted now.
It seems that January sees the return of more days of sunshine but the temperature bottoms out around the minus 2 range at nights for a while. We went for a small motor jaunt to a hamlet called Coombs up the coastline and wandered about the markets and had a pleasant day devoid of crowds of people that will return in the Spring. Life really is different here and it is a treat to become part of it.
Anyway, time to sign off for this week,
take care out there,
flatlander 52
Posted by flatlander52 at 5:29 AM No comments: