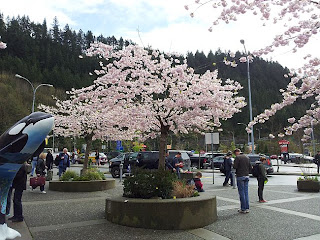 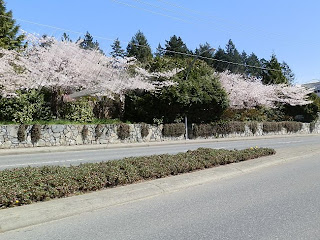 We have a couple of trees in the back that will be flowering in a week or so, just in time for the arrival of some friends (and yes, he is my golf buddy that I have mentioned before!) from the Prairie Flatlands for a looked forward to visit by all parties.
Take care out there,
flatlander52
Posted by flatlander52 at 6:54 AM No comments:

So, actually once again this is really a Saturday night posting and there is a reason for this.
Yesterday we took the ferry from home to Vancouver, stayed overnight and then left at 6 in the morning for the over the mountain drive to the small interior B.C. city of Vernon.
We were on the road for 6 hours and drove through 2 mini blizzards along the way as we journeyed to attend a Celebration of Life for my late Uncle KK.
And what a great Celebration it was. The family, friends and love were overwhelming. Indeed, if the greatness and impact of a man can be measured by these benchmarks, then he was truly a great man.
Tomorrow we are back on the road for the return to the Island in the late afternoon or early evening.
Another long day to be sure.
And that is why the posting a day early.
So, this will be a short edition this week.
A series of storms hit the province and city of Buenos Aires this week with massive flooding and 51 deaths as a result.
That poor, beautiful city.
One wonderful announcement of the government is that when all is restored that no property taxes for this year will be collected in the affected areas.
Something that governments in North America should look at copying.
North Korea has moved 2 missiles into what is termed "a better firing position" at either the USA or Japan. Once again this is a true head scratcher.
2 blasted missiles?
Ooh, I bet the Yanks are quivering in their boots!
Next thing we will see announcements from the North Koreans how they have "won" this war and now are laying down terms of surrender and repatriation to both the South Koreans and the Americans.
Once again you have to ask, what are these dudes smoking anyway?
In a case of follow the money trail, Caterpiller in the US, which closed a large Canadian plant a few years ago because the workers were "overpaid" in comparison to their counterparts in the States and transferred the jobs there, has closed a plant there now, releasing 460 of those workers.
Want to bet those jobs show up in Mexico or Asia?
In Canada, the American retailer Target has opened its doors to the public. Not surprisingly, prices are not as low as the same stores in the States. Indeed they rival that of the WalMart chain. Officials of both chains say that the Canadian market is "different" than that in the States.
What they really mean is that the Canadian consumer is beaten into submission into accepting higher prices without a murmur of opposition.
Pretty sad.
A massive leak of people hiding money out of country in order to avoid paying taxes touching individuals around the world has been released to the media. A large number are Canadians, yet the Federal Government, which is responsible for tax law enforcement has been strangely quiet in response to this bit of news. Of course a couple of low level civil servants have mumbled some talk of "looking" into this matter but not a peep from the Finance Minister or the Prime Minister.
Perhaps a set of laws for the average citizen complete with high fines and another set for the money hiders, many who seem to be in the legal or political profession?
Just saying.
Makes you want to take your money from the bank and stash it under your mattress. And you might as well considering the pitiful interest rates working for you versus the obscene fees banks charge you for the privilege of using your own money.
In the Merrie Monarch Hula contest, dancers from my favourite isle of Maui swept the competition, good news indeed!
And in Regina, yet another late winter snow/ice storm hit the besieged city yet again this week in what many residents hope is the last embrace of winter. Indeed, city officials expect that the huge man made mounds (actually mini mountains by Prairie standards) created by collected snow removal operations may not melt until September of this year!
Just in time for the next winter.
Wow.
Well, that is it for this short column,
take care out there,
flatlander52